Not all people like or are good at math. I can relate to that: I am not good at nor particularly care for history. You don’t have to be good at every subject or enjoy every subject. But I respect history, because I know that there are important conclusions that people can make by studying historical patterns. Likewise, math (and algebra) deserves respect.

Algebra is not about “solving for x”; algebra is about dealing with an unknown. There are many things you won’t know on a given day: how long it takes to get to work, what time you’ll go to bed, the number of times you smile. We deal with these every day. You leave a little earlier for work because yesterday’s traffic was bad, you sleep in a little later, you find friends who make you smile more. This is what Algebra is really about, but it takes a more formal notation so it can apply to anything.

So why does this mantra of pride in not using Algebra resonate with so many people? Because the way that math is presented at most schools is absolutely horrid. It’s shoved down your throat without context. “SOLVE FOR X.” I’ve seen what this method of teaching does to people. You want to prove that teacher wrong: you don’t need this dumb stuff that you’re being forced to learn. But would you still feel this way if you knew what it could do?

For four years, I mentored a high school robotics team. Many of the students who joined the team didn’t particularly like math, but liked the idea of building robots. They never thought they were smart enough to grasp those concepts. They couldn’t “solve for x”. The problem was that they didn’t know what they were solving. As soon as “x” became “the distance between where the robot arm is and where you want it to be”, it finally clicked. It’s a breathtaking experience to see a student go from “I’m not good enough” to “I learned this thing in school today, let me try it out on the robot”. Now math is a way for these kids to have control over their world. It’s not just something they understand, but a tool they can use to help them pursue their dreams.

Maybe you didn’t use algebra today. Fine. But the people who created the device you used to post this mantra sure did. 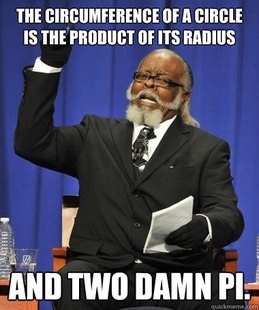 This made me chuckle more than it should have. Hooray for memes!