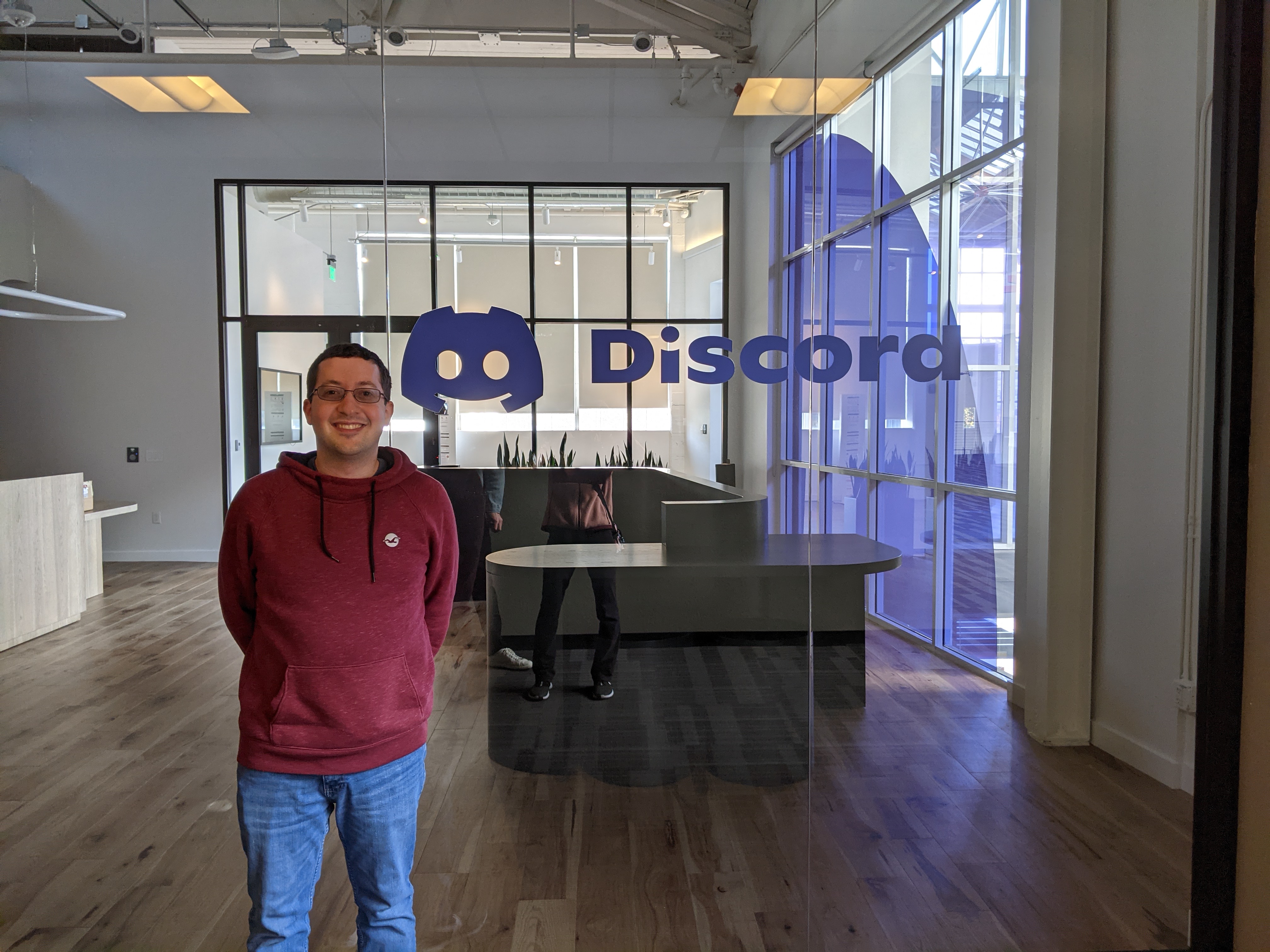 I announced on Twitter a few weeks ago that I took a job on the Tools team at Discord. I’m really excited by Discord’s mission to create a feeling of belonging in this world, being a long-time user myself. I was also really drawn to the problems the Tools team is solving for Discord’s growing engineering organization. I’m delighted to be starting this new chapter in my career.

I’m excited to announce that I am joining the engineering team at YourBase! YourBase’s flagship product is a build system that greatly improves the speed of software development with very little configuration. It brings me back to what I’m passionate about: improving how people work by making software simpler. It’s still early days, but I’m excited by the enthusiasm and the respectful, remote-first culture I’ve found at YourBase. I can’t wait to see what we build together!

July 19, 2019 will be my last day at Google. I will have worked at Google for 6 years, 3 months, and 11 days (even longer since I was an intern). After a few weeks hiatus, I will be joining Clutter to work on their storage and logistics services.

Not all people like or are good at math. I can relate to that: I am not good at nor particularly care for history. You don’t have to be good at every subject or enjoy every subject. But I respect history, because I know that there are important conclusions that people can make by studying historical patterns. Likewise, math (and algebra) deserves respect.

Algebra is not about “solving for x”; algebra is about dealing with an unknown. There are many things you won’t know on a given day: how long it takes to get to work, what time you’ll go to bed, the number of times you smile. We deal with these every day. You leave a little earlier for work because yesterday’s traffic was bad, you sleep in a little later, you find friends who make you smile more. This is what Algebra is really about, but it takes a more formal notation so it can apply to anything.

So why does this mantra of pride in not using Algebra resonate with so many people? Because the way that math is presented at most schools is absolutely horrid. It’s shoved down your throat without context. “SOLVE FOR X.” I’ve seen what this method of teaching does to people. You want to prove that teacher wrong: you don’t need this dumb stuff that you’re being forced to learn. But would you still feel this way if you knew what it could do?

For four years, I mentored a high school robotics team. Many of the students who joined the team didn’t particularly like math, but liked the idea of building robots. They never thought they were smart enough to grasp those concepts. They couldn’t “solve for x”. The problem was that they didn’t know what they were solving. As soon as “x” became “the distance between where the robot arm is and where you want it to be”, it finally clicked. It’s a breathtaking experience to see a student go from “I’m not good enough” to “I learned this thing in school today, let me try it out on the robot”. Now math is a way for these kids to have control over their world. It’s not just something they understand, but a tool they can use to help them pursue their dreams.

Maybe you didn’t use algebra today. Fine. But the people who created the device you used to post this mantra sure did. 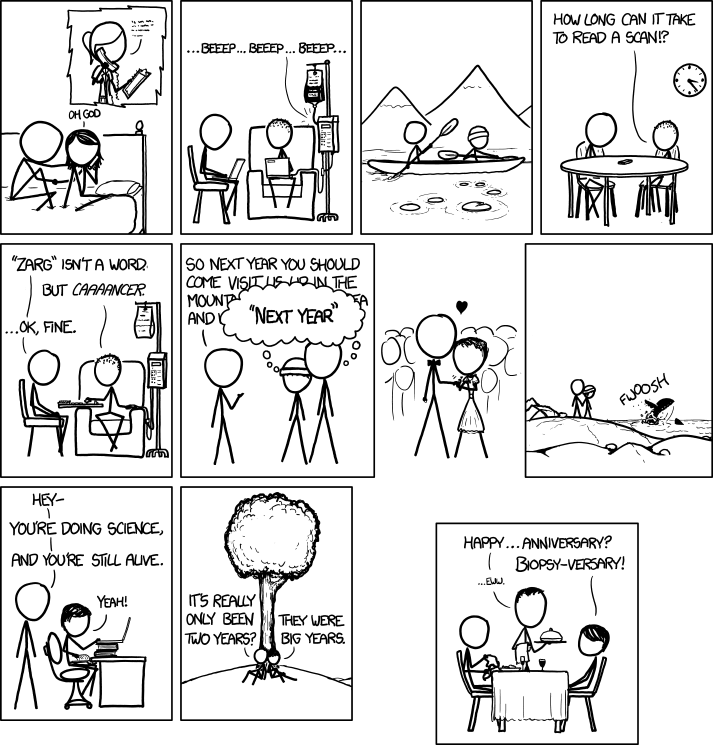 Today’s xkcd is so sweet I can hardly stand it.

Stop using autocomplete. People no longer think about what they say, what they type, and how they spell it. Especially for programming, autocomplete is a sin.

I’m dying of anticipation for Marble Hornets this week: Jay posted that he would be returning to the house this week, but there has been no update yet. I must know what happens!

I just finished House of Leaves. I’m not exactly sure what I think about it yet.

I am back on the Internet now. Yesterday was surprisingly relaxing. I ended up reading half of House of Leaves, which I had never read before (still haven’t finished it yet!).

Just to let everyone know, I’m going to disconnect tomorrow from the Internet and any kind of electronic communication as part of a class project. I won’t be dead (nor undead), just not connected. Hope this doesn’t cause any problems!

Obligatory xkcd reference (mostly so that I can preempt my friends who I know will end up posting this anyway): http://xkcd.com/597/

After spending the entire day on it, it’s amazing how joyful it is to get a program to accept keyboard input.

This last summer, I took a vacation to Alaska, and soon after it, I made this video of all of the photos I took. I don’t think I got a chance to show it to anyone else outside of my family, so I finally got around to uploading it. It’s in 720p, so enjoy!

As promised, I’m here to report more of the White Rabbit happenings. At the request of my friends, I’ve omitted the actual QR codes and their decoded text for the benefit of the game. However, I will tell the events as they were.

Friday morning, we reconnected to the slowhiterabbit.org SSH account that we had previously deduced. The lovable ASCII rabbit appeared along with a PEM-encoded certificate, a set of GPS coordinates, and the following message:

Bring a camera, the view is beautiful.

The GPS coordinates were in the forest right behind campus, so after class, we all hiked to the coordinates given. Naturally, I brought my camera, and took a couple pictures on the way up. 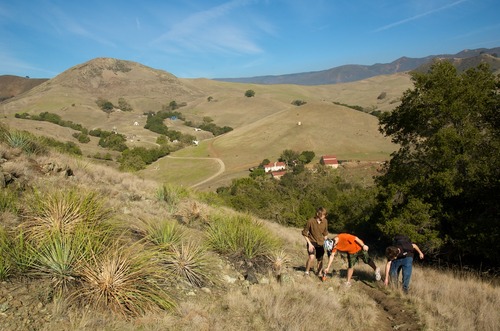 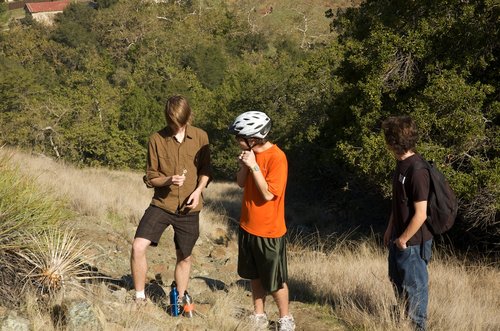 When we got to the coordinates, we found a tree with the rabbit hanging from a branch and a QR code on the opposite side: 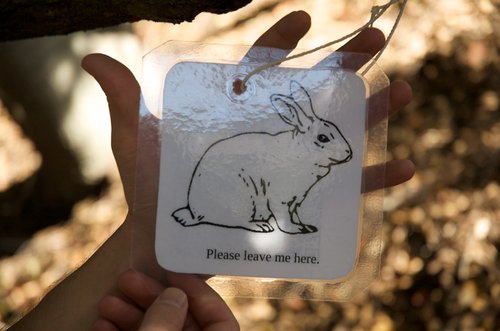 The QR code decoded to the private key for the certificate. We thought about what the certificate could be for, I decided to try going to https://slowhiterabbit.org/ , which requires a client certificate. After some command-line hackery, we created a browser-usable certificate file which allowed us into the website—a forum board. I registered, but just as the confirmation page appeared, my username began to delete itself, as if someone was hitting the backspace key. I freaked out. However, the username then replaced itself with the word “Alpha”. In the rabbit hole, just like in Project Mayhem, no one has names.

The quest will (presumably) continue next Friday… 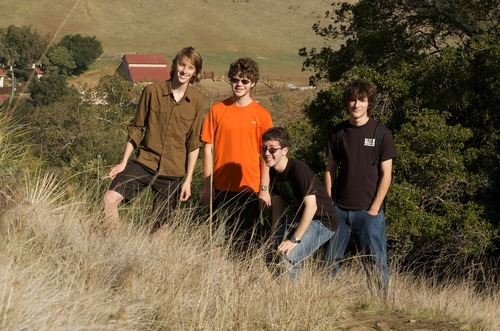 There has been more White Rabbit activity involving GPS coordinates. Brandon and I are going to check it out soon. 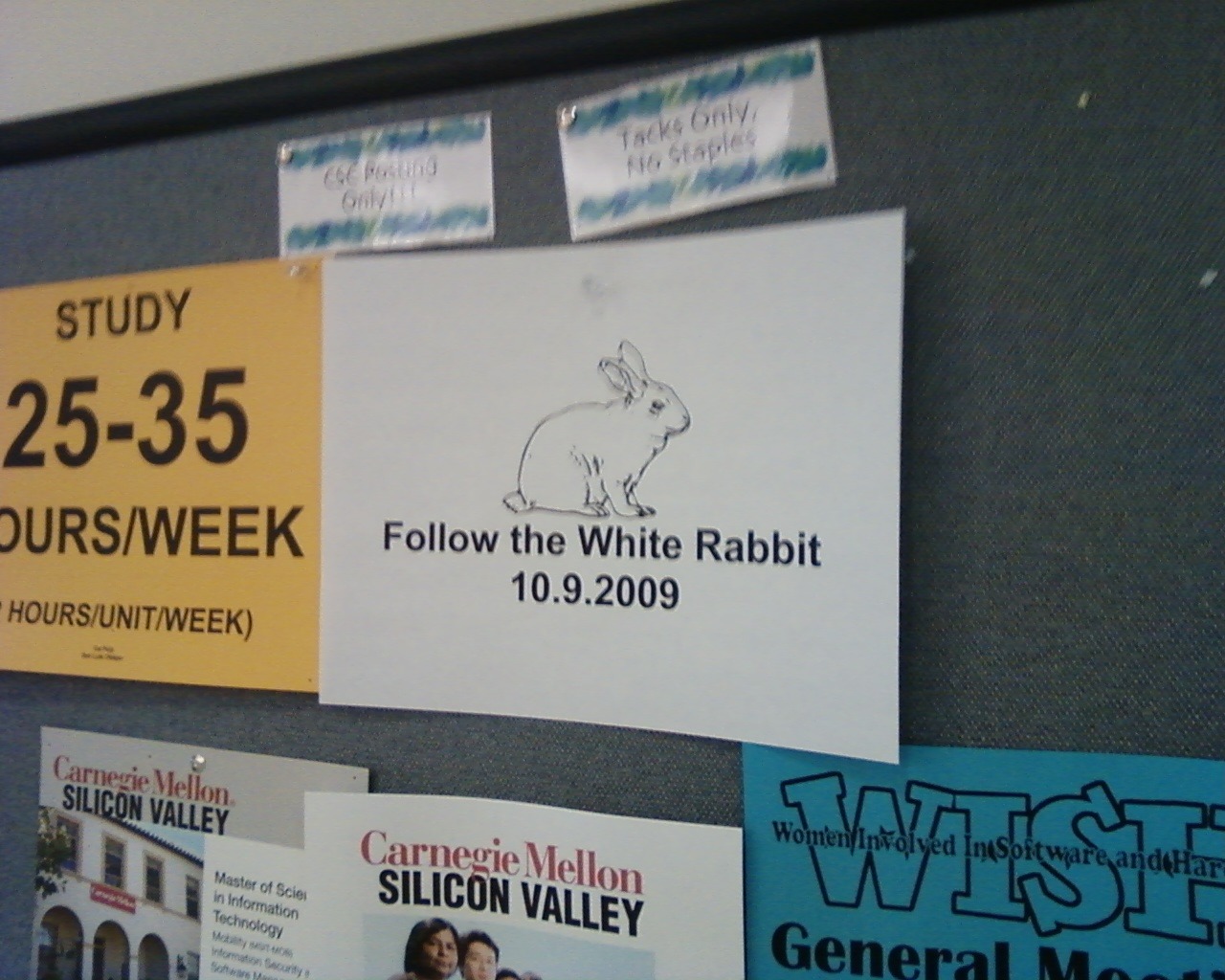 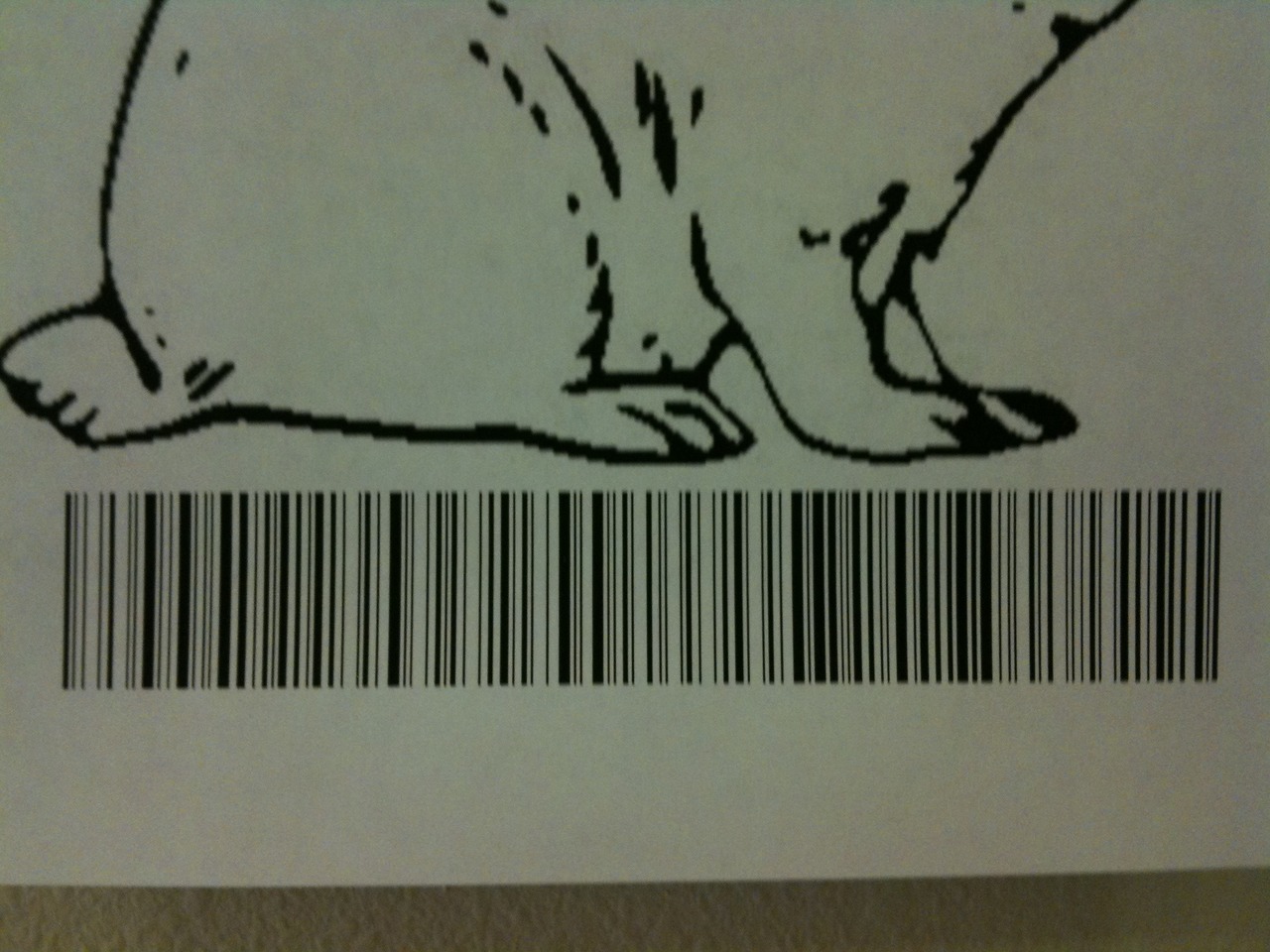 These fliers (Photo 1) popped up all over Cal Poly campus a week ago. I thought it was weird, but went on with my daily routine, thinking it was some concert ad.

I didn’t notice the fliers anymore until I left my computer science lab today, and my friends and I saw another flier that replaced the first one. The flier contained a QR Code (not pictured), the white rabbit, and a barcode at the bottom (Photo 2). Ryan happened to have an iPhone app for scanning QR codes and determined that the QR code was an email address: alice@slowhiterabbit.org . We weren’t sure what to send to that address, but we figured that the barcode may have something to do with it. I determined—after an hour of trying different scanning software—that the barcode was Code-128 encoded with the following URL:

This ended up leading us to a barcode-reading Java program. Since we already decoded the QR and bar codes, this seemed redundant, so I sent an email to Alice asking “What is the Matrix?” accompanied by the URL for good measure.

Not being satisfied with waiting for a response from Alice, I decided to do some additional research. The domain slowhiterabbit.org yields no results from a browser, but the emails don’t bounce. I checked the DNS information to find that it is a valid domain, but registered under DyDNS, a popular dynamic DNS company, so no dice on the web hosting account. What was bizarre is that there is no WHOIS information, the obligatory public records for any domain name, for slowhiterabbit.org. So who operates it?

I did a trace of the IP traffic to find that the domain is running from the IP address 68.123.180.229. I cross-referenced this with an IP geolocation service to find that the server is a personal computer in Suisun City, CA. From there, I don’t know where to go.

I’m not sure how far the rabbit hole goes, but it’s gone pretty far already. I’ll keep posting this week as I find out more. 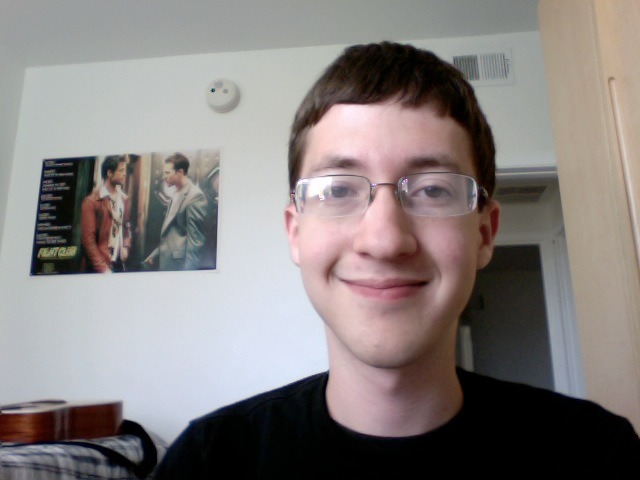 Me at my apartment. Fight Club for the win!

Done with first week of classes! I’ve already written two programs (one for my own benefit) and taken extensive notes.

I’m leaving home tomorrow afternoon for Cal Poly San Luis Obispo. It’s really weird to see my room nearly as barren as I saw it first. I’m still going to visit my house and everything, but everything seems so final.

To all of my friends: I love you all and I’ve been so lucky to have known all of you. Keep in touch, everybody.

This is Ross Light. Good night and good luck.

What I really should be doing

I should blog more. Increase the power of my words and whatnot. Meh. I don’t have too much to say and I don’t want to waste anyone’s time. That’s all.

Nothing says “I’m going to college” quite like a parking permit I just received in the mail.

Permalink
Those whom we love are often the most alien to us.
— Oromis (from Eldest by Christopher Paolini
Permalink