This is truly an amazing achievement. It’s a nice little contained film, even if you don’t know too much about Portal.

Unix Command Line of the Day

I wanted to paste a text file with my homework assignment into Gmail. Unfortunately, said text file was on the school server and I really didn’t want to permanently download the thing to my hard drive. So this is what I did:

This connects to the school server, retrieves graph.txt from my home directory, and copies it to standard out. I then piped the text into pbcopy, which is the Mac utility for manipulating the clipboard. After that, I switched to Gmail and did a paste.

White Rabbit and a deck of cards

[We had received a message from Enoch with a building number, a 0-level room number, and 3 two-digit numbers.]

Me: I don’t think this building has a basement.
McLeod: Can’t find a map… this is room 105…
Me: Maybe we’t wrong…
McLeod: … [looking at some nearby lockers]
Me: No way…

[And indeed, our heroes found two decks of cards (labeled Alpha and Beta, with the message “order matters”) inside the locker. Later, that same evening…]

Me: Dude, I think we saw something like this when we were researching the last cypher.
McLeod: Oh yeah?
Me: In Cryptonomicon, they used something called a Solitaire cypher. Maybe that’s it. All I’ve gotta do is pop open Vim and write a Python script to perform the deck operations. Let the hacking begin. [puts on music from The Social Network]

[After some home-cooked burgers, our heroes wrote a simple Solitaire cypher decrypter in Python and decoded the latest message.] 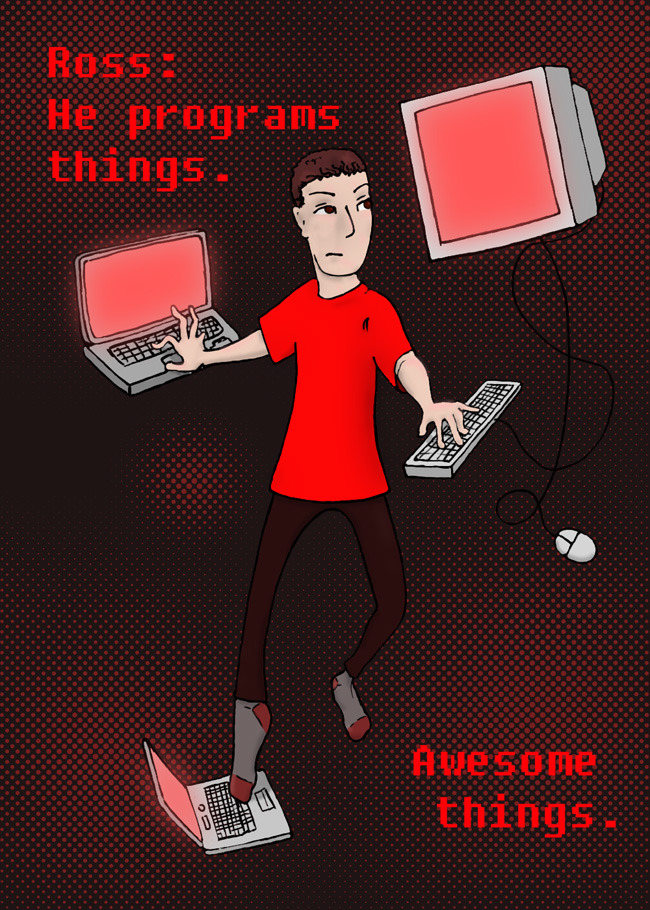 My friend, Claire, made this illustration for me. Thanks, Claire!

Upon doing some research today, I found a new element that’s worked its way into the HTML5 spec: the <device> tag. What this will allow web developers to do is have a standard way of using a device on the user’s computer (like a webcam or microphone).

What could this mean? The obvious one is video-chat capabilities without Flash, but I’m seeing this as a huge bridge between the desktop world and the web world. Just imagine: Flickr could upload pictures directly from your camera without any extra software, or browser games could use your joysticks natively. If this specification goes through, we could be looking at a dramatically different web.

The premise behind this video is that Google Chrome is so fast that you can do Mythbusters-style high-speed footage and Chrome will beat a sound wave.

Makes you wonder what connection speed they have. I won’t dispute that the rendering engine is that fast.

This is one of the coolest DIY electronics projects I’ve seen in a while. Thanks to my dad for showing me this!

If you haven’t seen this (don’t worry, I hadn’t until yesterday), you need to. The best way I can describe it is “The Blair Witch Project” meets YouTube. The storyline is compelling, and it’s still active, as far as I can tell. It’s been going on for about six months; the last update (at time of blogging) was December 22 of last year. It’s not for the faint-hearted—there are parts that had me jumping out of my seat.

How to Experience Marble Hornets

Start at the Introduction (embedded below), and work your way through the entries in order. Also, starting with Entry 9, there are video responses that are attached to each entry. Watch them, too, they seem to be an integral part of the story (or at the very least, scare you more). The main character also updates a Twitter feed.